One of the most difficult aspects of a product manager’s job is feature prioritization. There are so many different aspects to keep in mind: the developers’ availability, alignment with product vision and mission, the customers’ needs, impact on the bottom line… But ultimately, we all want to build features that customers love, which is why a featuring voting tool is necessary.

Today, we’ll explain what a feature voting tool is, how it works and why you need one in your product management tool stack. Last but not least, we’ll show you why FeedBear is an excellent choice for feature voting.

What is a Feature Voting Tool?

A feature voting tool is an application that allows your customers to vote on feature requests. For each new feature request, a customer can leave a + vote if they find it helpful and want you to build it. The more votes = the bigger the demand for that feature.

In order to facilitate voting on features, you need a feedback board (which you can build in FeedBear) where customers add new feature requests. If a customer wants to add a new request, they can just search first and if someone already created a similar request, they can leave an upvote.

Great customer feedback tools like FeedBear also have the option of your own employees voting on behalf of the customer. When you’re on a customer call or talking to them in chat, they can often say they’d love a certain feature, so instead of asking them to visit your feedback board - just vote in their name.

In short, having just feature voting in your customer feedback tool is not enough. To make the most out of the customers’ votes, you need to close the feedback loop completely - and you can do that with FeedBear.

Why do you need a Feature Voting Tool?

If you’ve been in product management for more than a minute, you’ll know that having quantitative feedback is crucial for making the right decisions. However, you may be a business owner who doesn’t see the value of feature voting. Let’s see some of the strongest reasons to use a feature voting tool like FeedBear.

Understand What Matters to Your Customers

There are two main types of feedback, and they’re equally important. Qualitative feedback is when customers describe how they feel about your product, what they like and dislike, and what new features they need. Quantitative feedback is a measurable output, e.g. the number of votes on a certain feature request or an NPS score for a feedback campaign you just ran.

A feature voting tool shows you what really matters to your customers in a way that is instant and easy to measure. Instead of wondering whether to launch a new integration or redesign your dashboard, you can just leave both customers up for voting to determine which route to go. Once the votes come in, you have a clear indicator of what matters more to your customers.

Identify Which Features are Important for Which Customer

If you think that feature voting (and quantitative feedback in general) doesn’t let you dig deeper into analysis, you couldn’t be further from the truth.

FeedBear lets you see the number of votes that each feature request gets, but also who voted for which feature. This is crucial for feature prioritization because a vote from someone on the cheapest monthly plan and an annual enterprise customer should not count the same. 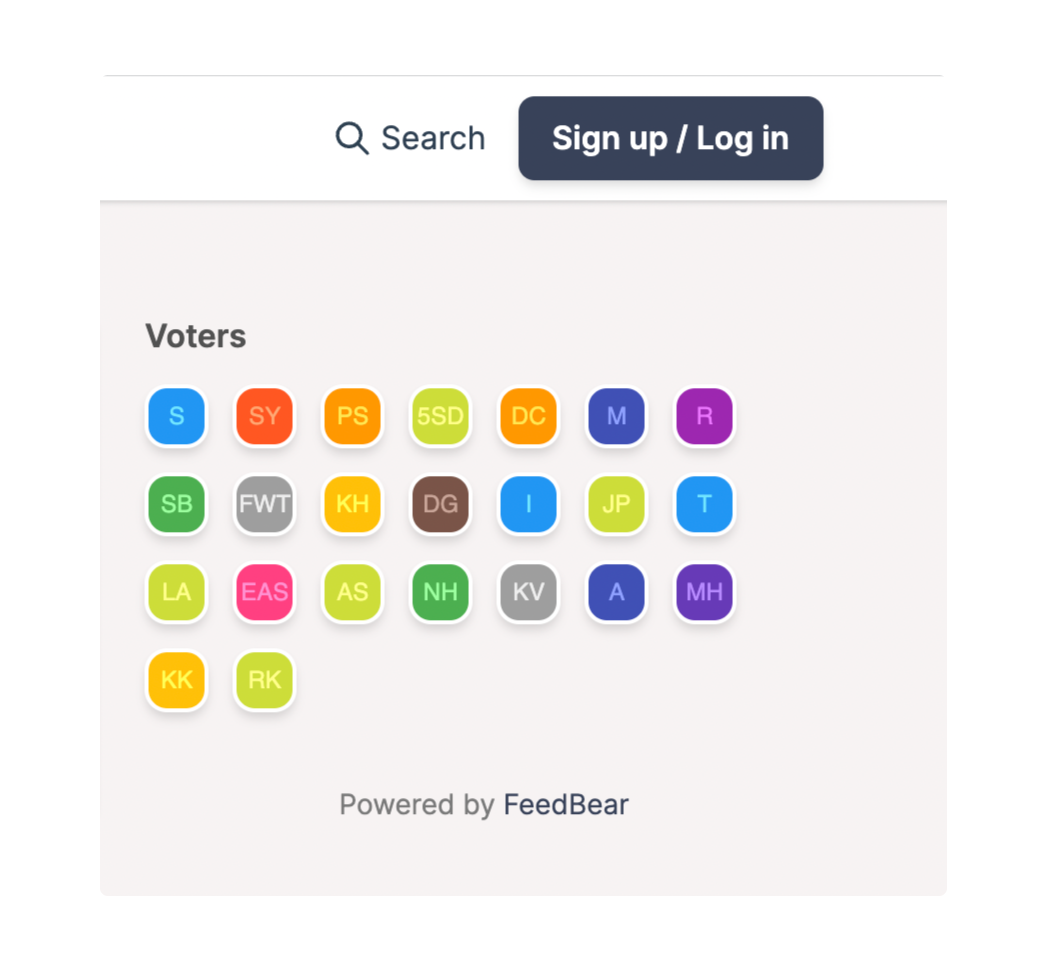 In short, you can see which votes really matter for your product vision and analyze the votes instead of taking them at face value.

Understand What Needs to be Prioritize on Your Roadmap

Let’s say that you’re in a situation where you know that three features are necessary for your product in the upcoming months. The budget is tight, you can’t hire new team members so you have to make up your mind - what are you going to build first?

Make your life easier and consider the votes on the three features to determine what to build next. It shouldn’t be the single factor influencing your decision, but it can help when you need to make a quick choice.

Your customers want to feel valued and appreciated and above all, they want to know that you’re listening to what they have to say. With feature voting, you’re literally giving your customers a voice and telling them that their opinion matters.

With FeedBear, voting on a feature is the beginning of a great relationship. Once a feature moves to your product roadmap, the customer that voted gets an email notification. As the request progresses all the way to a fully built feature, they get a notification each step of the way. And all it takes to get started is a simple vote.

In order to vote for features, customers first need to see a list of current feature requests. Feature voting tools have specific interfaces that allow customers to vote and in FeedBear, you can do it through a feedback board.

A feedback board is similar to a kanban board that you would find in Trello, Jira or Asana. Customers can add their own feature requests with a title and a description for everyone to see. As soon as a new feature request is added to the feedback board, your customers and your team can see it.

As new votes come in, you can see which feature requests are popular with your customers. Based on other prioritization criteria, you can either discard these requests or approve them for development. If you decide to build a feature, it moves on to the product roadmap.

A product roadmap is the natural extension of feature voting. Only the very best feature requests that you need for your product actually get built. It’s not always the requests with the most votes that end up being developed, but they have a pretty good shot at going live.

Once you decide that a feature request makes sense for your product (based on votes, costs to develop it, alignment with the product vision, etc.), you should move that feature request to a product roadmap.

In essence, a product roadmap is your team’s plan for the upcoming month, quarter or (rarely) a year. The roadmap contains the features that you plan to build, along with the deadlines and any other comments that you may have about a certain feature.

FeedBear Feature Voting Tool: How it Works and its Benefits

Now that you know what feature voting is, you should also know that you can do everything we mentioned above in FeedBear.

FeedBear lets you create a feedback board where customers can leave their feature requests with just a few clicks. Once they leave a request, they can explain their reasoning. Within the request, they can leave comments and have discussions in threads with other customers and your own employees.

Once the votes start coming in, you may decide to build a feature and push it to the roadmap. Great news - you can do that in FeedBear too. Creating a roadmap takes just a few minutes and you can move feature requests from the feedback board to the roadmap with just a few clicks.

Once a feature request is on the roadmap, you can maintain communication with the customer. As explained above, they’ll get an email update every time you move a feature request from one stage to the next. All it takes is that initial vote.

Here are the biggest benefits of using FeedBear for feature voting:

Feature voting is one of the most important ways to prioritize feature requests and determine what you’ll build in your product. Instead of manually collecting votes through different channels, just create a free FeedBear account and let your customers vote on what matters the most to them.

Not only will you make important product decisions more easily, but you’ll also show your customers that you value their opinions. Ready to get started? Sign up for a free trial of FeedBear today!