Why FeedBear is the Best Canny Alternative for Startups

Startups looking for a more affordable and easier to use Canny alternative need look no further than FeedBear.

FeedBear is designed to be simple, intuitive, and offer the fastest way to collect feedback and collaborate with your users, at a price all startups can afford.

And while FeedBear and Canny operate in a very similar way, FeedBear has the edge for lean startups who don’t need a tool with enterprise-grade features.

FeedBear vs Canny: The Similarities

There’s a lot of overlap in what FeedBear and Canny offer. Both tools are made to help businesses collect and action user feedback in the product development process.

You can create feedback boards that allow your customers to post feedback or feature requests, and vote and comment on existing posts.

Users can provide feedback via an embedded widget on your app or website, as well as by following a link to the board itself. 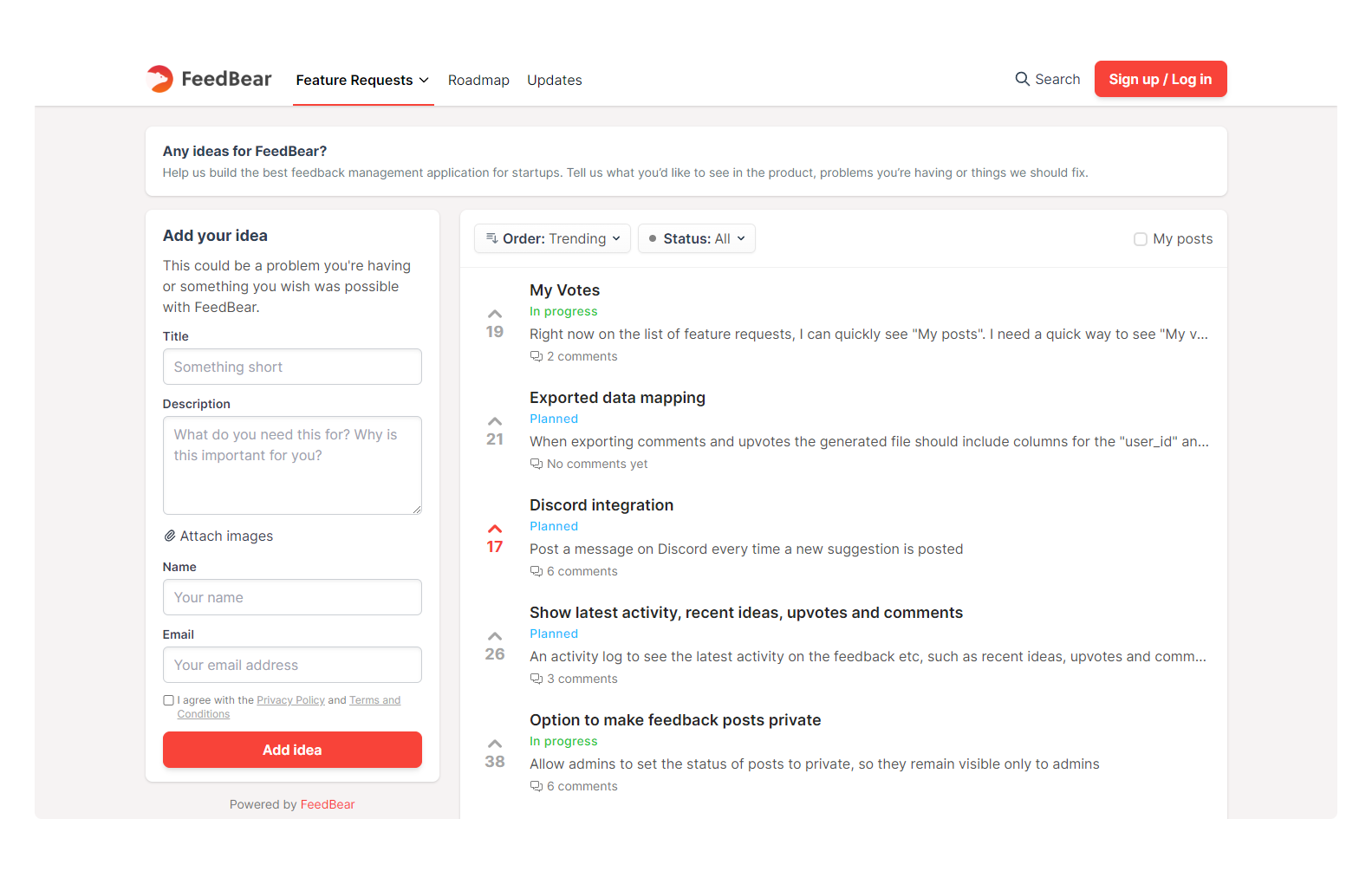 You can use the feedback collected from your users to build a public roadmap, to show users which features are in the pipeline. 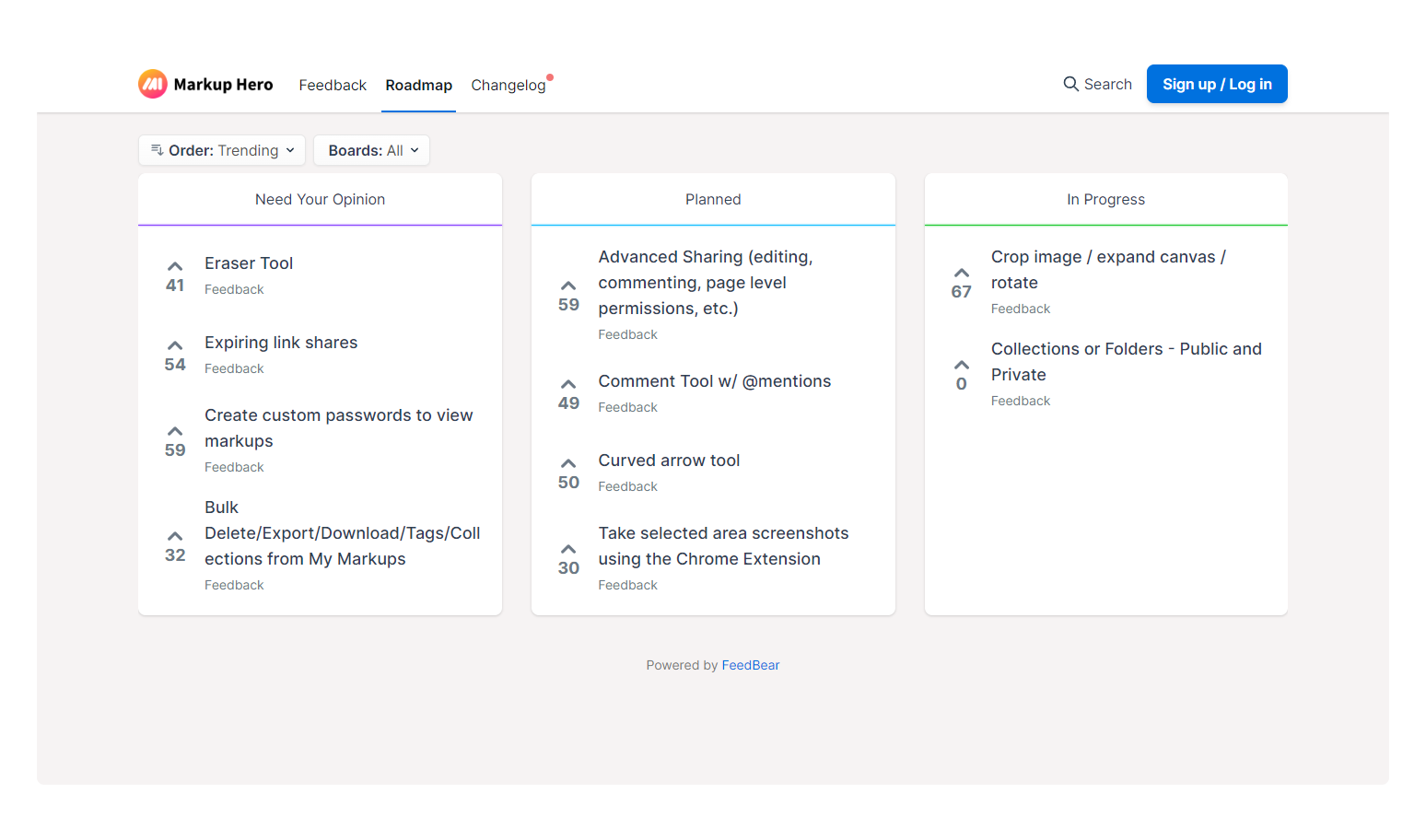 Finally, you can cap it off with a changelog, announcing new updates, changes or bugfixes, as well as email updates to users who proposed or commented on a card when that feature gets shipped. 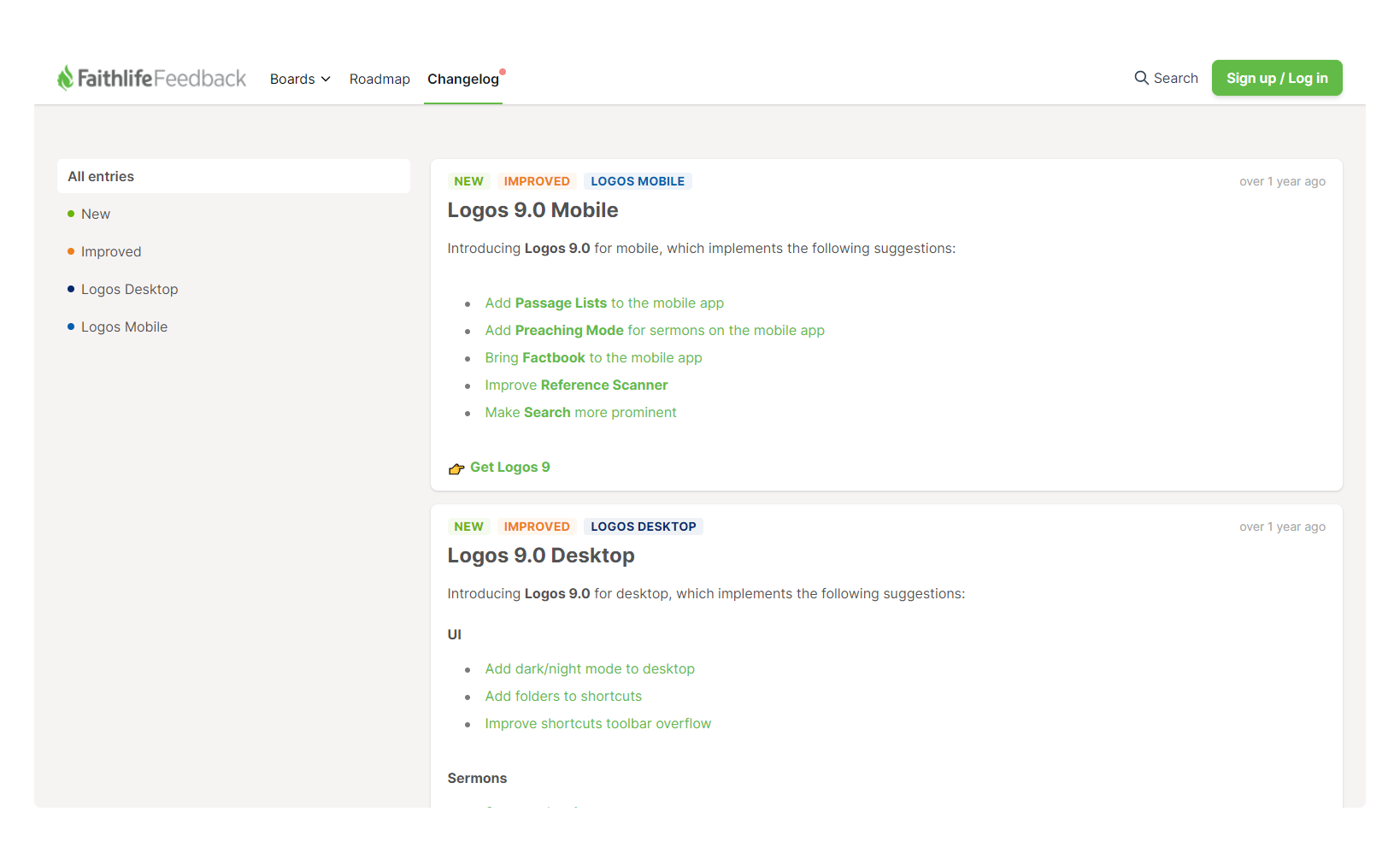 As we mentioned already, there are plenty of similarities between FeedBear and Canny. So where do the two platforms differ?

At the highest level:

The main differences come in who each tool caters to. FeedBear is suitable for businesses of all sizes, but particularly lean and growing startups. It comes at a pricing model that promises to be sustainable as you grow and use the tool more.

With the range of features and integrations you get with Canny - as well as the price point of their paid plans - it appears to be focused more on larger-scale, enterprise users. And with the way their pricing is set up, you can argue that they’re leaving average or mid-tier users out in the cold.

Why FeedBear As a Canny Alternative?

FeedBear is a better Canny alternative for startups who need a simple, stripped-down feedback collection tool with no superfluous or overly complex features.

Our customers find FeedBear is quicker to set up, and has less of a learning curve than other feedback tools on the market.

FeedBear also offers affordable pricing, which is flat and scalable - you’re not going to get hit with an ugly surprise when you realize you need more out of the tool.

Here’s a breakdown on why FeedBear is the best Canny alternative out there today:

It’s Simpler and Easier to Use

FeedBear users rave about one thing in particular: how simple and intuitive it is.

It only takes minutes with FeedBear to get a feedback board set up, and start collecting valuable insights from your users. It’s perfect for lean startups, who don’t have the time or headspace to start learning a complex piece of software. 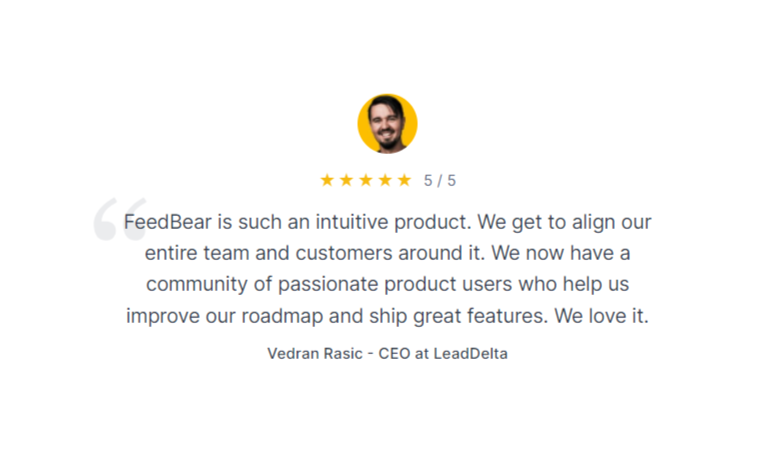 In comparison, Canny caters to large companies with big customer success teams with thousands of customers leaving feedback and has great tools to let you sort through the noise. That does come with a lot of extra complexity that you might not need.

More features mean a more complex product. There’s no way around that.

FeedBear was designed to be as usable as possible so we kept the features and integrations to the essentials - aiming to give you exactly what you need without overcomplicating things.

It doesn’t require a remotely technical person to set up and you can get it up and running in literally 60 seconds after signing up.

Jeff Solomon, founder of Markup Hero put it this way:

“I was very pleased with the cleanliness of the FeedBear. It's something that can get bloated and overdone easily, but I’m very happy and it fits with exactly what I wanted. There was a core problem I was trying to solve and I really just wanted to solve that one thing - and this is the best solution”

Luke Wilson, Founder of WebBoss had this to say about FeedBear’s UX:

“I had it all completely set up and ready in a few hours. It was done. I uploaded the logos, set up the branding and the boards - and away we went”

The more users add their ideas, comment, and vote on the feedback board and roadmap, the more valuable FeedBear is as a tool. We want you to get maximum value and user engagement, so we’ve focused on reducing the friction as much as possible for your own users.

Canny has an SSO feature that enables users to post onto their board from their existing user accounts.

This is good because users don’t need to create a separate login for Canny. It reduces friction, but doesn’t totally eliminate it. FeedBear goes a step further, eliminating friction almost entirely.

Your users don’t have to sign in or register to anything on FeedBear. All they need to do is leave a name and email in the feedback form. Users can also vote anonymously on items in the Feedback Board and Roadmap without an account!

Wherever possible, FeedBear eliminates friction for your users to engage. This means more value for them and your business.

FeedBear offers flat, transparent and affordable pricing. It starts at $29 per month, which includes unlimited boards, unlimited end users, access for 3 team members, and just about every feature FeedBear has to offer.

Canny’s pricing is a curious one. Until recently, their pricing began at $50 per month, rising sharply based on usage metrics. The next tier up was $200 per month, again with usage limits and additional fees for more users.

They’ve since moved away from this pricing model, which by their own admission was extremely unpredictable.

Their new pricing model introduces a free tier, which is great - as long as you never need to upgrade to a higher plan.

The next tier up - the “Growth” plan - is now $400 per month. This plan includes most of their most powerful features, as well as their full range of integrations.

Integrations are a big selling point for Canny, yet on the free plan you only get 1 integration. To add any more integrations to your workflow (such as collecting feedback from Intercom, then sending it to Jira), you’ll need to up your monthly bill by $400.

You also need to be on the Growth plan to make use of Zapier for any custom workflows, which comes standard with FeedBear plans.

Being able to use Canny for free sounds great. Until you need more.

You might need additional features, only found on Canny’s Growth plan. You might want more integrations, or to use Zapier to connect your feedback boards with other parts of your business’ workflow.

A lot of growing startups can’t afford to spend $400 per month on a feedback collection tool. So you’re always going to be limited by what you can get with the free plan.

Alternatively, you’ll switch from the free Canny plan to another tool, like FeedBear, once you need more features. That means a lot of work and hassle porting over your existing feedback boards, roadmap, changelog and more, to the new tool.

FeedBear is not free, but at $29 per month, it’s far from a large expense. But it offers a significant advantage in that, as you grow, you’re not going to be worried about outgrowing the tool and having to pay $400 for more features.

FeedBear is affordable when you’re getting started, and stays affordable, no matter how big your company, and your feedback management system, grows. 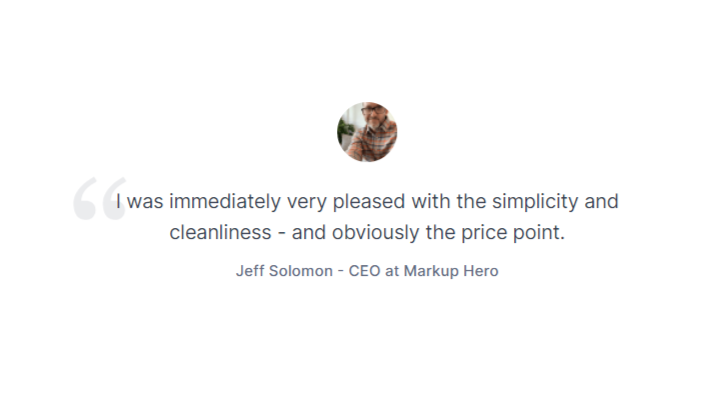 You shouldn't have to learn how to use yet another tool. FeedBear is quick to set up and incredibly easy to use with exactly the right amount of features.

If you're after something simple with all the must have features to collect customer feedback, manage it and prioritize it based on votes, publish a public roadmap and changelog, then we have the right tool for you!

Try It For Free