Feature Upvote is a good tool for gathering customer feedback. But FeedBear does everything that it does, and far more, for a lower price tag.

If you’re looking for one solution to completely own the feedback process, FeedBear stands head and shoulders above Feature Upvote.

Feature Upvote vs FeedBear - the Similarities

Both FeedBear & Feature Upvote are modern tools with the goal of helping you to organize and process user feedback.

Both allow you to:

Both are designed to be easy to use, simple, and effective. With Feature Upvote, this simplicity is really taken to the extreme with a very stripped down interface and feature set.

FeedBear is just as easy to use, but has a wider set of features, allowing you to do more, and own every part of the customer feedback management process. 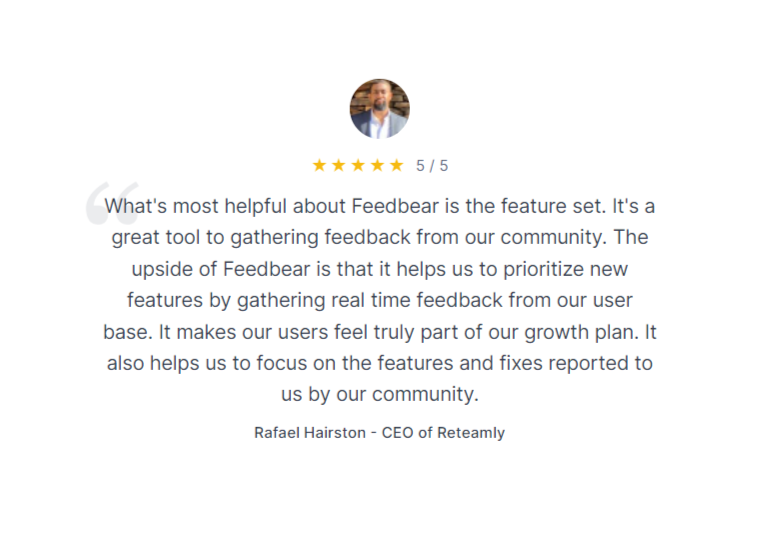 You Get More With FeedBear

Feature Upvote is a tool for gathering feedback and displaying it on an interactive feedback board. In this respect it does a great job.

FeedBear also gives you feedback boards - as many as you want - allowing users and team members to submit ideas, discuss them amongst each other, and vote on what they want the most.

FeedBear boards are customizable, easy to organize with tagging, and completely interactive. But FeedBear gives you a wider set of features, all integrated with the core functionality of your feedback board.

FeedBear Gives You a Feedback Board and a Roadmap

FeedBear gives you the same feedback gathering tools as Feature Upvote, but also has you covered for the next stage with a Roadmap. 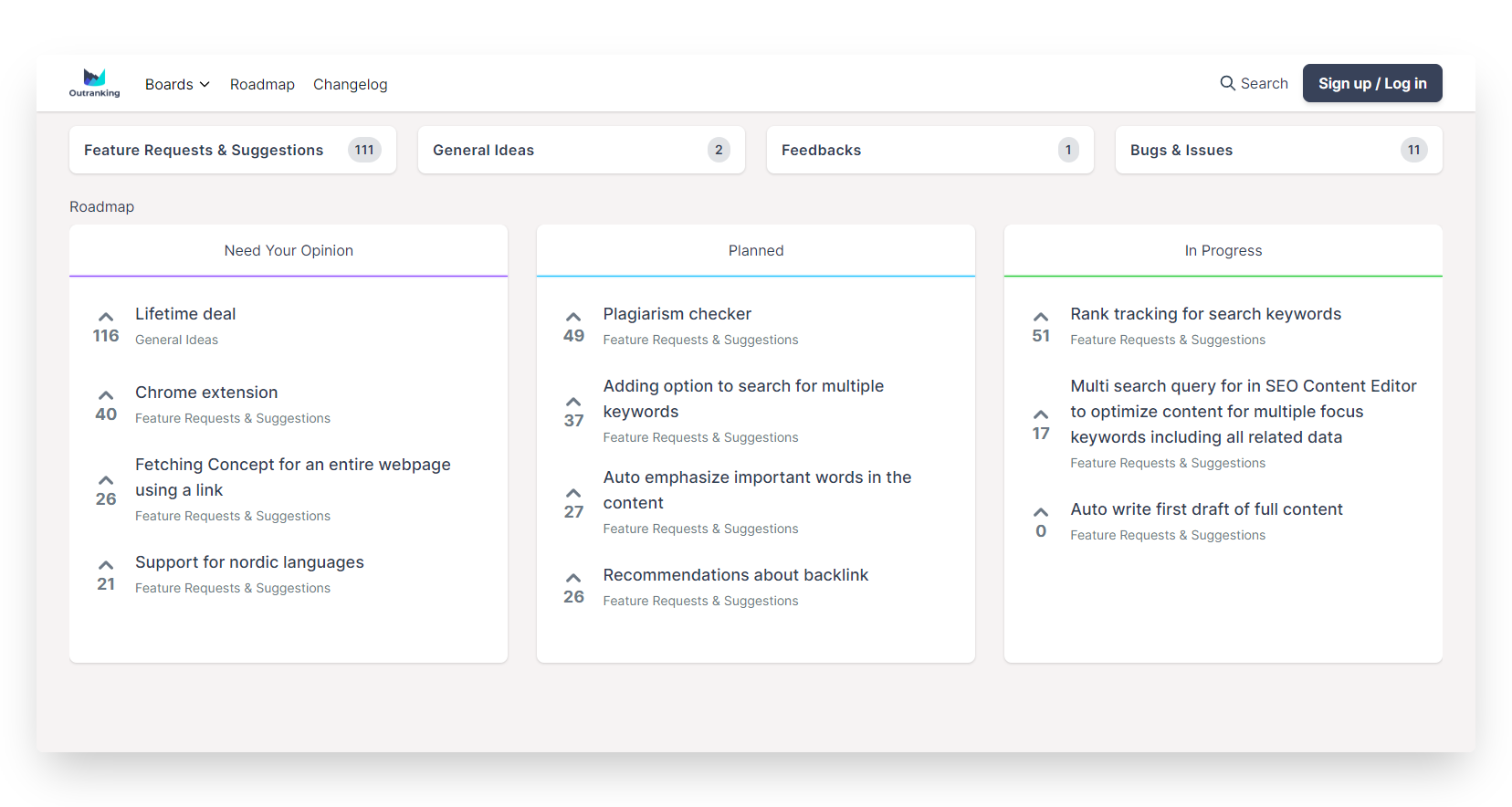 The roadmap is where viable ideas that you’re going to actually build live. This is the second part of the FeedBear system.

Without the roadmap, it would be hard to give users and team members a simple overview of what you’re planning to build, and when new features and updates are rolling out.

It’s one place to plan and visualize your product strategy, and share your longer-term vision with users and stakeholders.

With tasks categorized as planned, or in progress - the team and your users are aligned and expectations calibrated.

You can also have users vote on the roadmap itself, giving you even more data to make prioritization decisions on. Roadmaps can be public, or private - depending on which suits you best.

Take a look at our own Roadmap to see how it looks in practice.

With Feature Upvote, there is no equivalent. They are purely an idea or feature request gathering tool.

FeedBear Gives You a Changelog

As well as a roadmap, FeedBear gives you a changelog too. 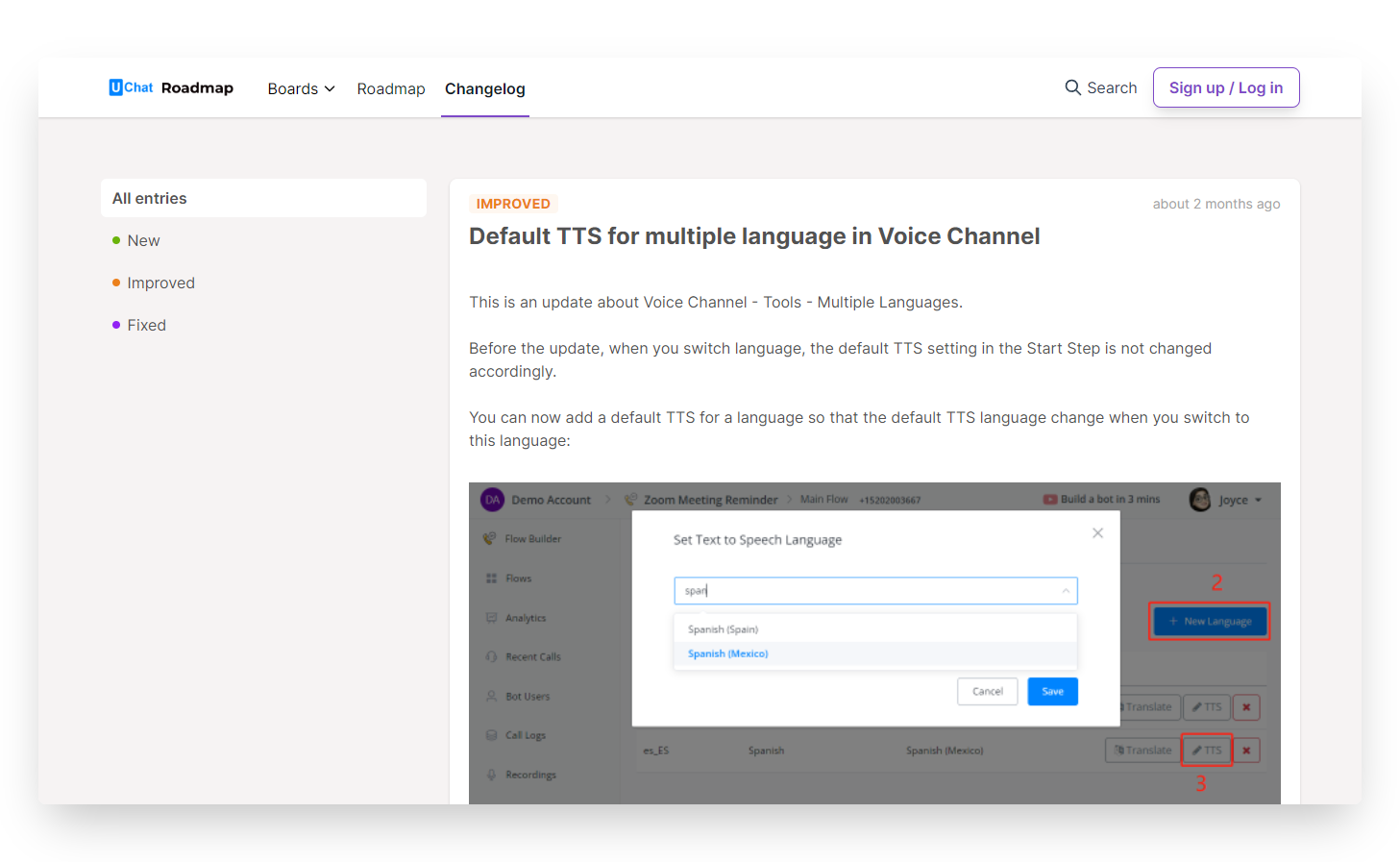 The changelog is the final destination for the best ideas and feedback submitted by your users. Once you’ve built that feature, squashed that bug, or rolled out that update - the changelog lets you announce it to everyone.

It’s a single destination to get a fast overview of everything new you’ve built and released.

You can categorize updates into various categories, like New, Improved, and Beta.

Your changelog closes the feedback loop for all involved, providing closure for your team and users and demonstrating to the world that your product is actively maintained and improved. This is great for your brand and your users.

FeedBear Gives You a Site Widget

Instead of collecting feedback using a portal, widget and sidebar, Feature Upvote just points everyone – you, your sales team, your customers – to the one feedback board

This is fine, but could be a bit limiting. The user has to leave whatever they are currently doing and load up the board separately. It adds friction.

With FeedBear you also get a site widget to make it easy for users to leave feedback without any hassle. You can embed it anywhere in your site, especially where the user is already logged in, and let users send requests and feedback with one click.

The widget has user identification, prevents duplicates by suggesting previous posts, is customizable - and you can hook the popup to any element you like!

Of course, users can visit the board and submit their ideas too. 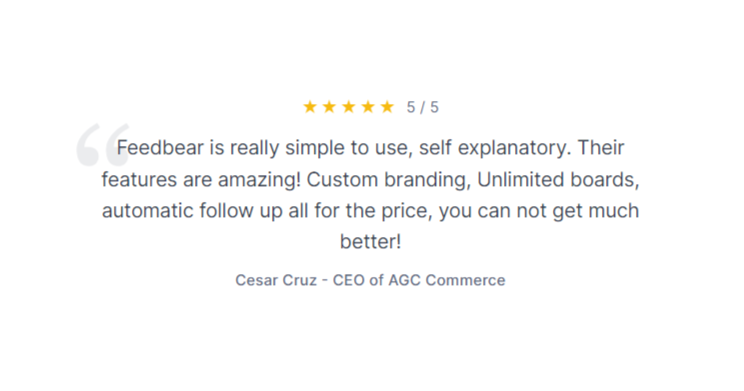 FeedBear is more affordable than Feature Upvote, even though we give you far more.

Feature Upvote costs $99/m per board.

That’s 99 dollars per month for each feedback board, with unlimited contributors and team members, and a custom domain.

FeedBear is $29/m for unlimited boards within the same project (i.e. same branding/domain).

That also includes unlimited contributors, up to 3 team members and all features (except for SSO and privacy features).

So FeedBear gives you unlimited feedback boards, a roadmap tool, a changelog, a site widget, and much more - for 40% less than Feature Upvote charges you for one feedback board.

You get so much more for your investment, especially if you want to run multiple boards.

If you have a larger team or need advanced features like Single Sign On and private projects, FeedBear is $99/month, with unlimited boards, unlimited users, up to 10 team members, and all product features.

Try It For Free

Why FeedBear is a better Feature Upvote Alternative

We give you everything that Feature Upvote does, and much more, for a far lower price.

If you’re looking for a complete tool to collect feature requests, keep users engaged and announce new features - then FeedBear is for you.

You can also try it out completely risk-free with our 14-day free trial. You’ll be able to set up and start testing the tool in just minutes, and you don't need to give any credit card details either.

Ready to start really listening to your users? Let’s get started!