What Are Outcome-Based Roadmaps?

Imagine that your best friend invites you out for dinner in the new fancy restaurant that just opened. While she orders a juicy steak, you grab a salad. Sure, the steak sounds delicious, but you’re on a diet and you want to lose 20 pounds. You hit the treadmill for an hour yesterday too, and you don’t want to ruin your progress.

Very few people eat salads or run for hours because they truly want to do so… They want to lose 20 pounds. They’re not after the steps, they’re chasing the outcome.

Think of your SaaS product roadmap. If you have a bunch of features thrown together without any rhyme or reason - you’re giving your customers steps. Instead, you want to sell them an outcome - what you want to achieve long-term with the features you’re building.

This is called an outcome-based roadmap and it’s an approach that can bring massive value to your customers. Let’s find out how it works and why you need it.

What Is an Outcome-Based Roadmap?

Most SaaS companies have pretty hectic roadmaps. If you open any of them, you’ll see a range of different feature requests and bug fixes assigned into columns for months and quarters. For the most part, there is no logic in how the items are chosen for the roadmap.

Alternatively, there is logic and it’s just building whatever makes the most profit. However, that’s not a proper outcome. 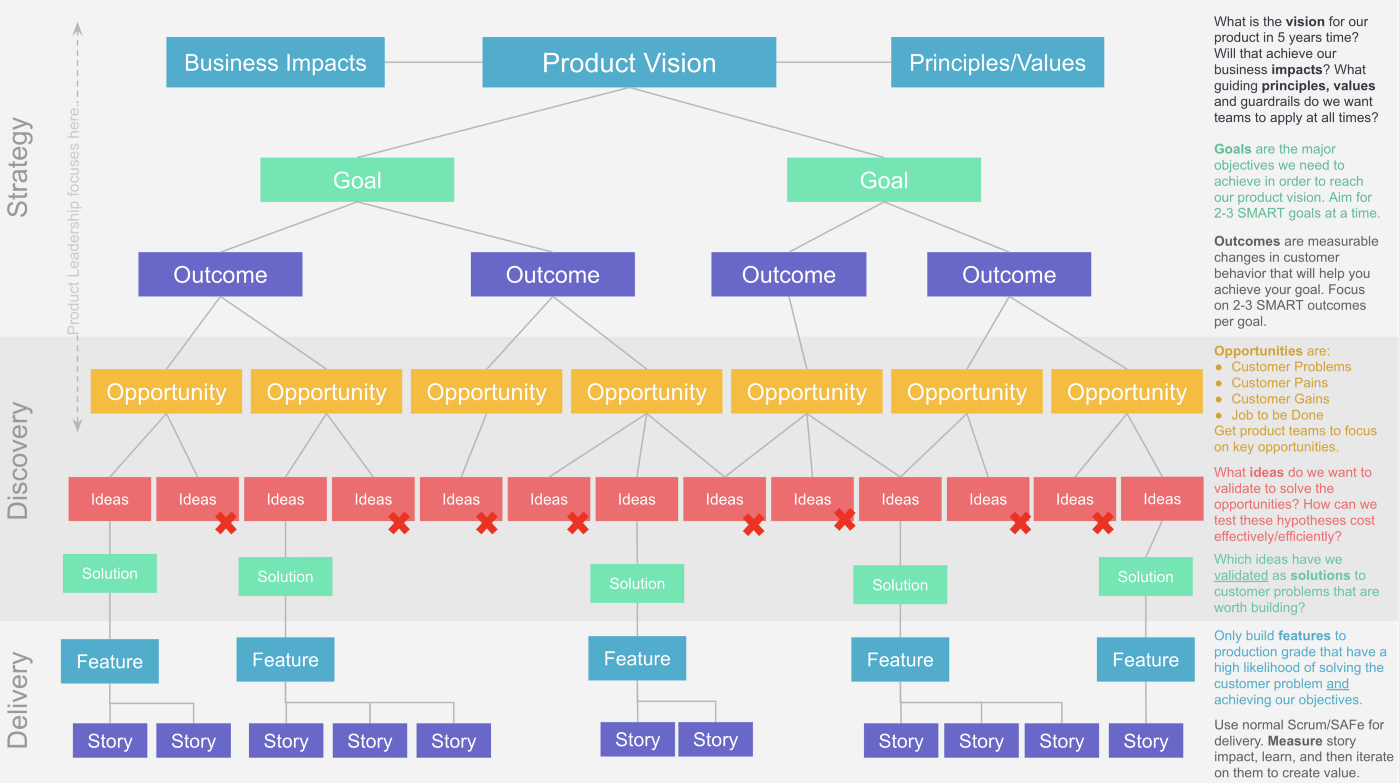 An outcome-based roadmap is a roadmap that has a clear focus on a specific outcome, such as improving onboarding, creating a new functionality for a specific segment of users, breaking through into a new market or something similar.

In other words, an outcome-based map means giving users the image of themselves when they’ve lost 30 pounds, compared to giving them features - low-calorie meals and strenuous exercise.

What Can Outcome-based roadmaps provide?

An outcome-based map can be useful in many aspects, despite requiring more time and work and most importantly, more strategic thinking. Here are some of the major benefits it brings. 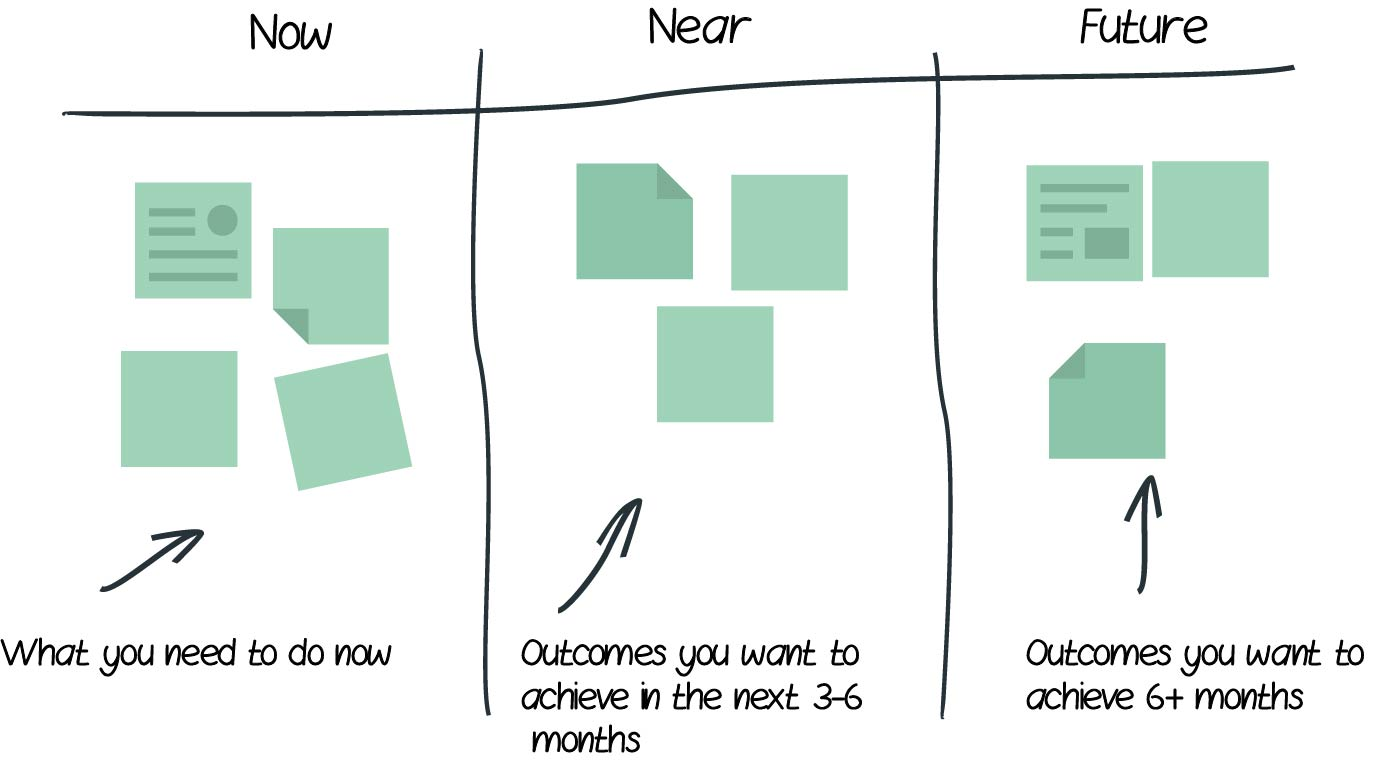 You will establish a clear set of goals rather than having strewn-about features that make no sense when put next to each other. Your internal team will be aligned on the common goals and KPIs they need to achieve.

You give your team the autonomy to deliver the results in a way they feel is the most suitable - because you’re giving them bigger goals rather than small chunks of features to be built. At the same time, you’re empowering them to do their best work.

Both your customers and your team will have room to give feedback on the overall goals you have with your product and the overarching product vision - rather than just individual product features.

Why Are Outcome-Driven Roadmaps Useful?

The biggest benefit of an outcome-driven roadmap is that it clearly shows the bigger picture to your customers and they can see the vision more clearly. Instead of discombobulated features in your backlog, they can see the puzzle pieces coming together to form a complete picture.

Second, they force you to come up with a long-term strategy rather than waiting for customers to guide you entirely with their feedback. While feedback is crucial, you need your own vision that aligns with the most important company OKRs and KPIs.

Most of the roadmaps that SaaS companies create are driven by features rather than outcomes. This means that the entire roadmap and the backlog are chock-full of different feature which make sense on their own, but don’t go towards a common outcome.

There are many reasons for this and if your roadmap is feature-driven, don’t be hard on yourself. Building a product is hard and the way you choose and prioritize features is impacted by a huge variety of factors.

Some features are urgent because they bring revenue, others have to be built because you need to catch up with competition and some of them have just been planned for a long time and you can’t remove them.

How Do Outcome-Driven Roadmaps Differ from Feature Roadmaps?

There is one major difference - outcome-driven roadmaps are centered around a common goal for a certain time period. For example, you sit down with the executive board in January and determine that the goal for the year is to reduce customer churn by half.

All of the product features released in the upcoming year will be focused on that one initiative - reducing churn and improving user retention. This doesn’t mean that there is no room for other feature requests. On the contrary. It just means that you have a clear goal and vision for the features you build as opposed to just chucking feature requests on one big pile.

4 Steps to Get Started with Outcome-Based Roadmaps

To get started with outcome-based roadmaps, you don’t have to reinvent the wheel. All it takes is a little bit of careful planning and four basic steps.

Each product roadmap needs to be guided by a common vision. The product manager or owner can’t just come up with it - it needs to be an overarching company vision and goal. So, sit down with the most important stakeholders to figure out what the the crucial goals are for the year or quarter. Choose one and stick with it in your roadmap.

Figure Out the Strategy

Once you have the vision, such as “upsell 30% of current customers to a higher pricing plan”, it’s time to get down to strategy. This is where product comes into play, as you can devise a list of actionable steps to take in order to get to your destination.

The hard part is done and now you need to create a roadmap outlining the key features you have to build to achieve your vision. Make sure that the roadmap consists of features that lumped together make sense and tell a story to your customers and team - a story on how you’re going to achieve the goal you envisioned.

Everything that doesn’t align with your product vision and doesn’t require immediate attention goes to the backlog. This doesn’t mean that you don’t want to build features that pop up as requests. It just means that you’re prioritizing the bigger vision in favor of smaller features that don’t fit into the bigger picture.

But What About Metrics?

Most roadmaps (and companies) are driven by specific metrics. Whether it’s CAC, LTV or something else, metrics are at the core of each product. After all, developing features for customers is nice, but the bottom line is the most important aspect of running a subscription-based business.

You may be worried that having an outcome-based roadmap means neglecting metrics. However, it just means putting metrics in the background for a little bit.

If your main outcome is to decrease churn, all of the features on the path to that outcome are dedicated to achieving it. This gives your team more freedom in determining how those goals are achieved. You’ll still chase for your metrics, but you’ll have more fun in getting to achieve them.

The best way to get started is to choose a great roadmapping software. You can try out FeedBear today and create beautiful, intuitive roadmaps that show your vision to both customers and team members. Sign up for a free trial today!