Collecting feedback is the backbone of building a great product - you probably know that by now. Luckily, we no longer have to rely on nudging our customers with emails or phone calls - there are now countless product feedback tools on the market that can get the job done more quickly and efficiently.

One of those tools is Upvoty - a popular lightweight tool for collecting feedback and letting customers vote on your feature requests. If you’re looking into Upvoty, there may be some other tools in the market that do the job equally well - and better - and deserve your attention.

Here is our list of the top Upvoty alternatives to consider in 2022 and beyond. But first…

What makes Upvoty a good choice as a product feedback tool?

The best aspect of Upvoty is the ability to capture customer feedback in one place. You can do this with a customer feedback portal, where customers can leave their feature requests, bug reports and any general piece of feedback. Moreover, it has product feedback boards that you can share with your customers or internally. The most important part - all feedback is centralized. 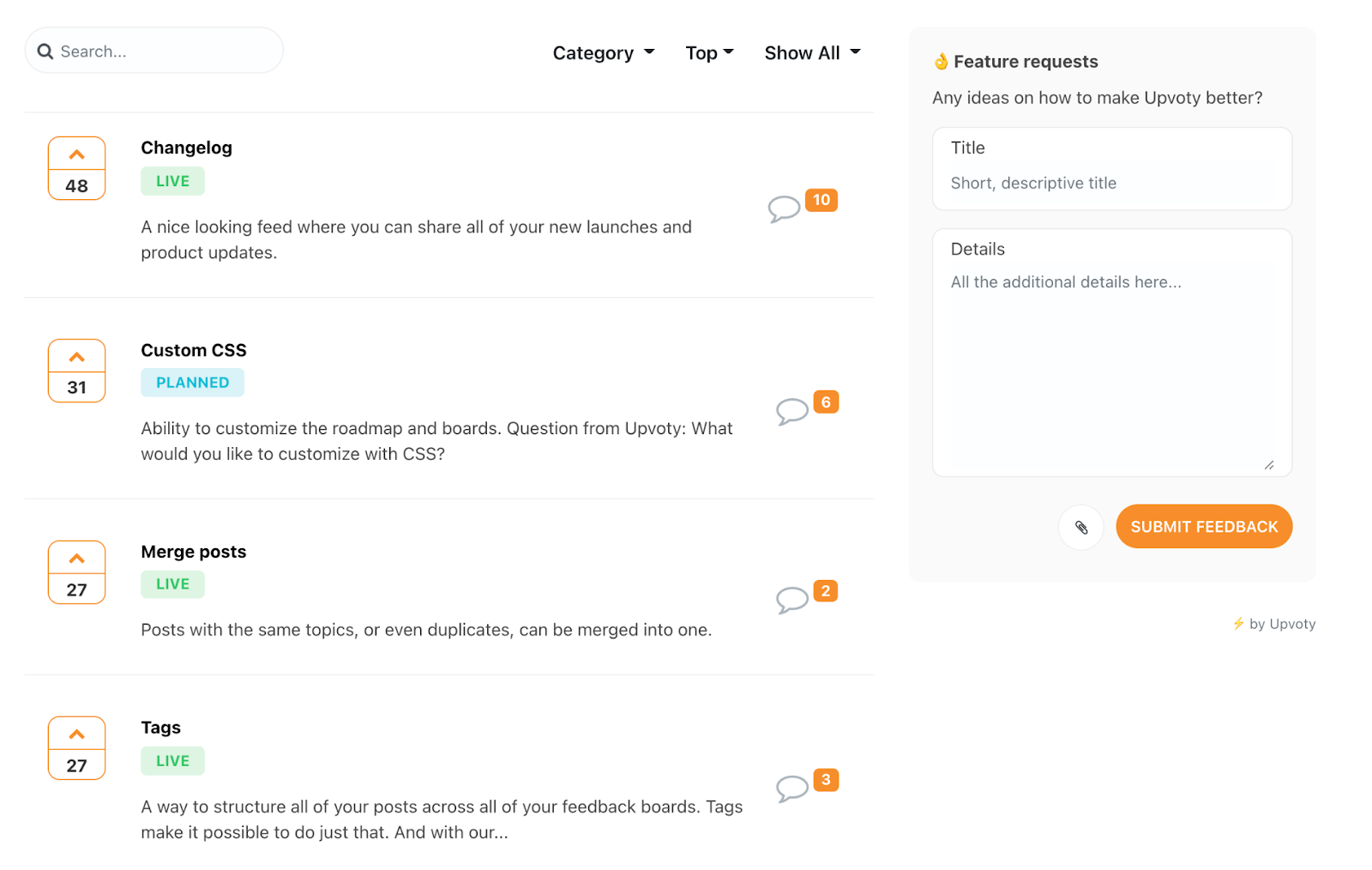 You can also create product roadmaps fairly easily as well as create changelogs once a feature gets launched. If you use the product from the beginning to the end of the feedback cycle, this covers the entire journey from idea to realization.

Last but not least, Upvoty pricing is seemingly affordable, with the cheapest plan going for $15 per month. This gives you access to one feedback board and 150 tracked users who can leave feedback.

This tool has quite a nice set of features, making it a pretty good choice for smaller companies with simpler products. However, it’s not perfect.

The most affordable plan is not such a great deal when compared to some other products we’re about to mention. With 150 tracked users, you’re going to run out pretty quickly and you’ll be forced to upgrade to a higher tier at $39 per month. And at this price point, there are competitors with better and more features. 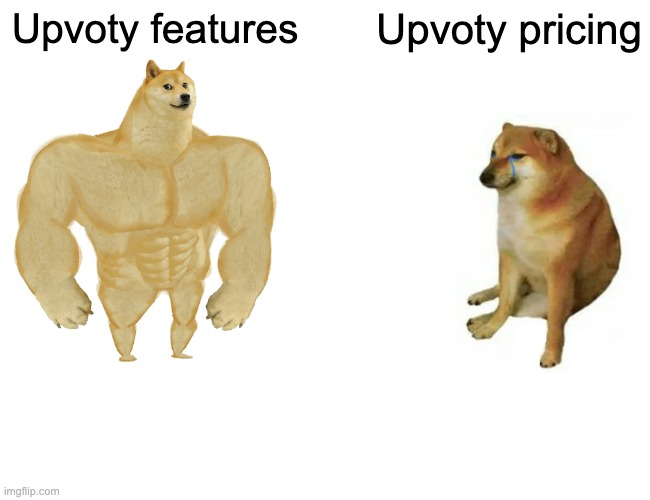 Moreover, the cheapest plan allows for creating just a single board. If you run multiple products or just want to collect different types of feedback on different boards, you have to jump for the more expensive plan that gives you 5 boards.

Having said all of that, let’s take a look at some Upvoty alternatives that are worth considering.

You can create a feedback board as a starting point for all feedback entries from your customers. Here, they can add new feedback items, leave comments and upvote and interact with your team. Once a feature request or a bug fix is ready for work, just move it to a product roadmap. There is a changelog feature as well to keep customers up to date.

FeedBear lets you fully customize the way you collect feedback. It allows for custom design, your own custom domain, custom CSS code, custom branding, and statuses. For the basic feedback board/roadmap combo, you can get started in as little as minutes. With some extra tinkering, you have a unique platform for feedback management.

With all of this said and done, FeedBear is actually a lot simpler to use than Upvoty or any of the competitors mentioned below. Even with no knowledge of code, anyone can set up a feedback board with upvotes in as little as 5 minutes. There are plenty templates to grab so you don't have to waste time on design either.

FeedBear does not have a lengthy signup process and if all you want to do is get upvotes, that's what you can do minutes after creating an account. Don't need a roadmap? No worries, you can just collect feedback and get upvotes.

Perhaps the best aspect of FeedBear is the pricing. The cheapest plan is called Startup and costs $29 per month. This gets you unlimited users (customers) and three members on your team. You get all the features mentioned above, which provide great value for money.

If you want to jump for a more expensive plan, $99 per month gives you access to 10 team member seats, single sign-on (SSO), and the ability to have private projects.

If you’re looking for an Upvoty alternative with improved features at a better price point, sign up for FeedBear today! You can grab a free trial to see how much of an improvement it is - before committing to a paid plan.

One of the most commonly mentioned Upvoty alternatives, Hellonext is a good choice for startups looking to get into the world of collecting feedback. Due to its nice array of features and competitive pricing, it’s worth considering as a better option than Upvoty, but see for yourself.

It has a pretty similar feature set: feedback boards, roadmaps and changelogs, with one addition - there’s a knowledge base feature as well. Sharing a feedback portal is easy as you can provide your customers with a link. 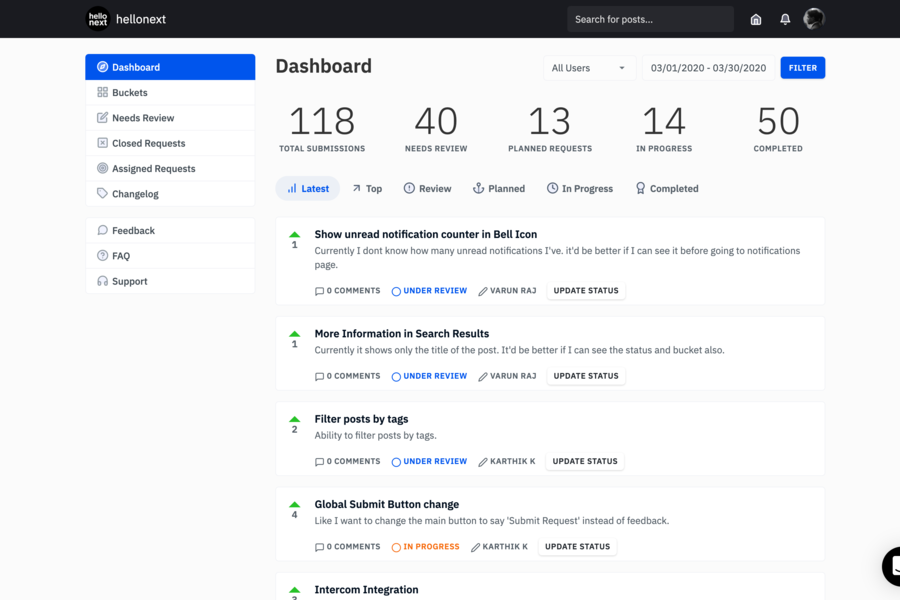 The roadmap is also pretty easy to use and you can do all the typical things you’d want - add and move items, tag cards, let your customers vote. The one thing that they cannot do is engage in discussions through comments, however.

You can use Hellonext for free and get two feedback boards with two admins. You get the roadmap and changelog features, although with no customization options. Basically, you’re forced to upgrade to the first paid plan at $49 per month.

This gives you 10 feedback boards, 3 admins and unlimited customers. Unfortunately, it also puts it higher in terms of pricing when compared to FeedBear or Upvoty, which really means that you get a better deal with either of those two tools compared to Hellonext.

If you’re looking for something similar to Upvoty but somewhat simpler, this is a good route to take. It has three main product aspects: Ideas, Roadmap and Announcements. Ideas is the typical feedback board where customers and internal team members can leave their feedback, add feature suggestions or bug reports and vote on them. You can also vote on behalf of your customers with a few clicks. 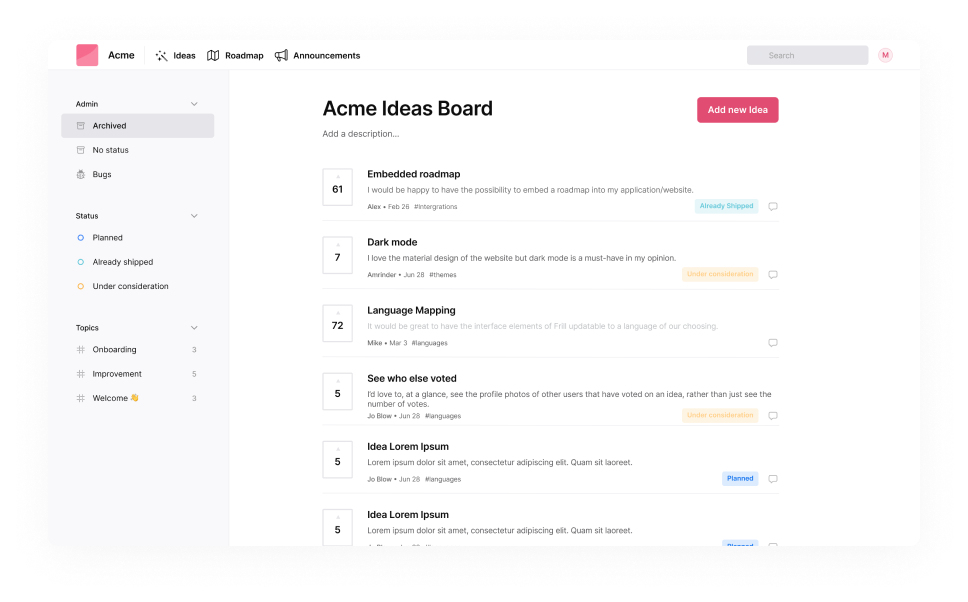 Roadmaps is exactly what it says - the ability to connect the feedback you collected to a roadmap and then show it on your website for your customers to see. Although embeddable and somewhat customizable, the roadmaps have only three main styles that you can choose from and that’s it. If you want to do your own colors, fonts or other customizations - no can do.

Announcements is a typical changelog that you can use separately from the rest of the features if you want to. In short, if all you want to do is announce, you can use this aspect of the product entirely free.

There is a completely free that allows you up to 20 ideas, which you’ll run out of in a matter of days. The number of tracked users is unlimited on the free plan as well, which is a nice change of pace compared to the rest of the entries on this list. If you want to jump to a paid plan, it’s $25 per month, which gives you up to 50 ideas and everything in the free plan.

Frill is an interesting option if you want to use it for free, but as soon as you start adding more feature requests and ideas, it shows its inferiority compared to the competition.

Calling themselves the all-in-one feedback tool for every business, Sleekplan makes quite a big promise. To fulfill it, they offer feedback boards, roadmaps, changelogs and interestingly enough, satisfaction surveys - a feature that makes them stand out from the crowd. 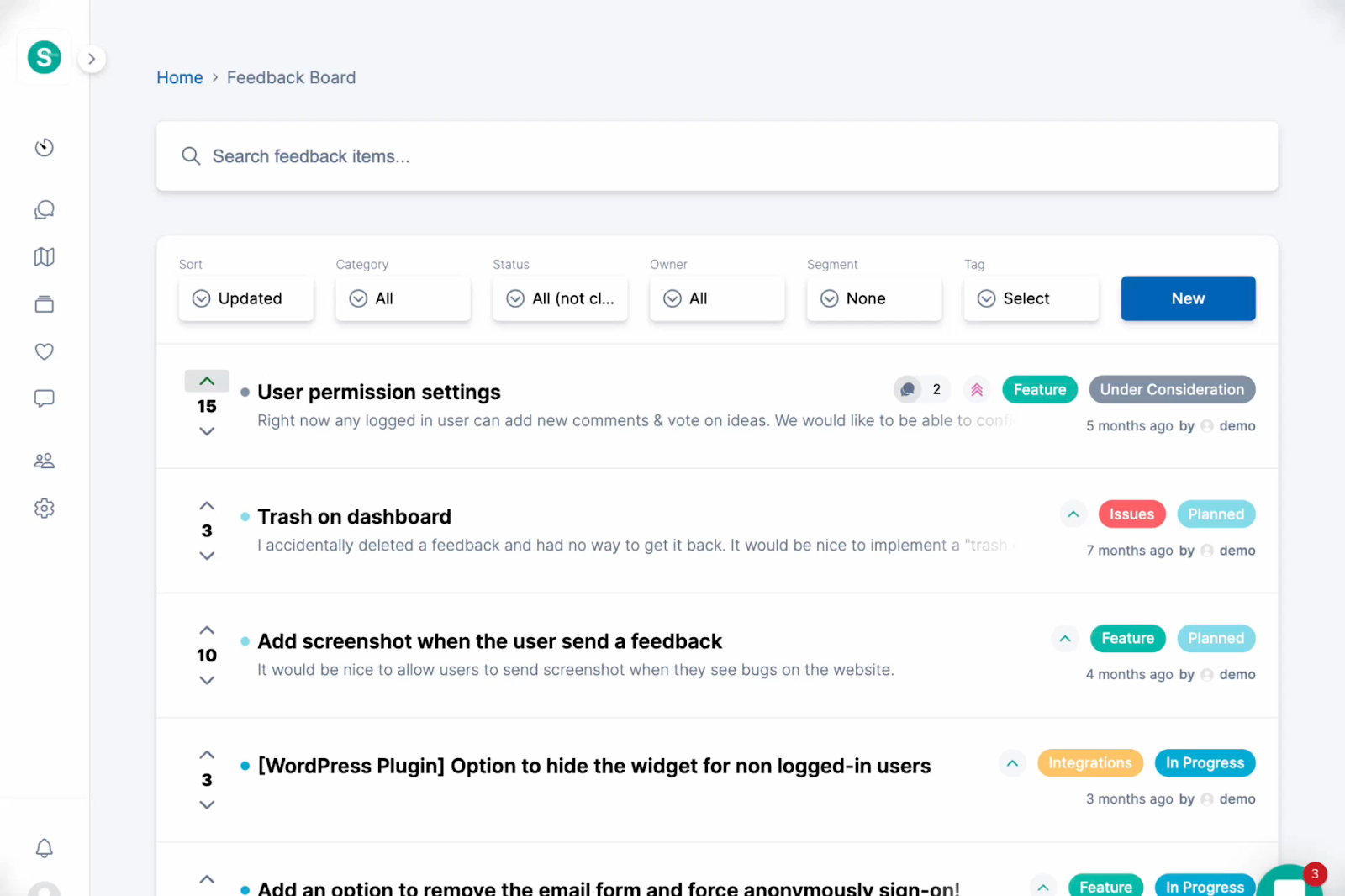 It all starts with a feedback board where you can collect feedback from your customers or your internal team, either anonymously or with their credentials. The feedback board can be hosted as an individual page with its own custom domain, look and feel, or as a widget that’s built on top of your website.

It’s similar with roadmaps, you can embed them on the website or have them launch as fully independent pages. There is some amount of customization available and you can easily connect your roadmaps to your feedback board and ultimately, your changelog.

Where things get interesting is that Sleekplan also gives you NPS and CSAT surveys you can run on your website. If you want to collect more than just product feedback, this is a nice entry point without paying extra for survey software.

There is a free plan which gives you access to unlimited tracked users, feedback entries and subscribers. However, you don’t really own any of your data as there are 0 seats on the team. The Starter plans gets you all of that with 3 seats plus the roadmaps feature, all at $15 per month.

As attractive as that may sound, the tool is still in its infancy and many customers complain with UX and UI issues both in the back end and in the front end when displayed to the end user. If you’re willing to make that gamble and you like the extra feature with surveys - this is a good choice.

Upvoty is an excellent tool if you’re looking for something lightweight without the added complexities of a full-scale tool like Productboard. For a startup, it ticks all the boxes and it comes at a price that is hard to say no to.

But there are better solutions. If you’re looking for an Upvoty alternative that has all of those features, a sleeker user experience and a super pricing, make sure to give FeedBear a try! Sign up for your free trial today to see why we’re the superior customer feedback tool.